Over the past year, we’ve been supporting our first cohort of Geocomputation & Spatial Analysis (GSA) students as they learn to code and work with geo-data in an open computing context (predominantly FOSS). This post reflects on some of the problems – and solutions – that emerged as a result.

The first incarnation of GeoCUP (short for GeoComputation on a USB Platform) was a system-on-a-key described in a previous post. With the support of the Department and Faculty (not to mention the hard work of one of our own alumni: /ht Ryan Barnes), the USB keys were supplied to students at the start of term as follows:

The idea was that students could launch GeoCUP at boot time on a cluster machine from the USB key and would thus be running a full Linux distribution over which they had complete control. In an institutional computing context this was as close as we could get to giving them their own computer to play with, break, and manage.

We had also expected, based on what we’d seen with Linux ‘Live’ distributions that it would be feasible to have a key that would work with multiple types of firmware (including Apple’s EFI) and that students could therefore also run GeoCUP at home.

A final advantage would be the ease of replacing a lost key: since all their code was in Dropbox all they needed to do was reconnect Dropbox on a replacement key and they’d be up and running again in no time. 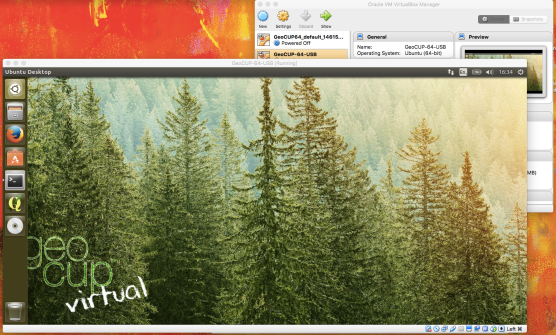 No well-laid plan survives much contact with the real world, and several issues emerged in the run-up to launch day:

These start-up issues were then supplemented by performance issues after roll-out:

These were all serious issues, but in spite of them there were a number of students who reported that using GeoCUP had nonetheless helped the module as it gave them full control of their system, exposed them to power-user features such as the bash shell, and opened their eyes to some of the practical problems entailed in managing a system and a codebase. They also got to watch us doing some fairly frenetic on-the-fly debugging.

So with that in mind…

Part way through the year we began to experiment with Oracle’s VirtualBox platform as a way to enable students to run GeoCUP on their own computers (as that had signally not happened with GeoCUP.v1). Although there are higher-performance virtualisation platforms out there, VirtualBox is free, open source software so there were no licensing or cost implications to rolling this out on cluster systems or in suggesting that students download it to their personal computer.

GeoCUP.v2 is built as follows:

We’ve adapted installation scripts posted by Dani, up at Liverpool University for use with our own GeoCUP distribution since this speeds up the configuration and updating of the system as new Ubuntu distributions are released. You find them on GitHub: github.com/jreades/GeoCUP-Vagrant.

The main advantages of this shift are:

Alongside this, however, we retain the flexibility to give students administrator rights over their (virtual) machine, to install new software on the fly, and to take advantage of software updates without having to embed them in a centralised IT upgrade cycle. We also think that the virtualisation approach has significant advantages for IT services because they don’t have to monkey about with the BIOS of the cluster machines since the entire process is now software-based.

In the long run we’d like to automate even more of the distribution process so that we are no longer even responsible for ‘burning’ new USB keys or given students a drive from which to copy the latest version of GeoCUP.

Tools that enable just this sort of approach are beginning to surface: Vagrant and Docker are the two leading contenders at the moment, though they do slightly different things. I’ve been impressed by the way that Dani’s Vagrant-based distribution allows you to download a 2GB file containing a full Linux server distribution, have it automatically configured when it first runs, and then interact with the system via Jupyter Notebooks: it’s a fairly lightweight, but fully-functional Python-based geodata analytics ‘server’.

There are several problems with using this approach in our context:

I suspect that these issues will be remedied in the not-too-distant future, and James and I will be exploring some of the possibilities with colleagues at ASU and UNSW over the coming year.

Finally, as mentioned above, a /ht to Ryan Barnes, one of our own Geography grads who did the heavy lifting on version 1 of GeoCUP.

iThere are no comments